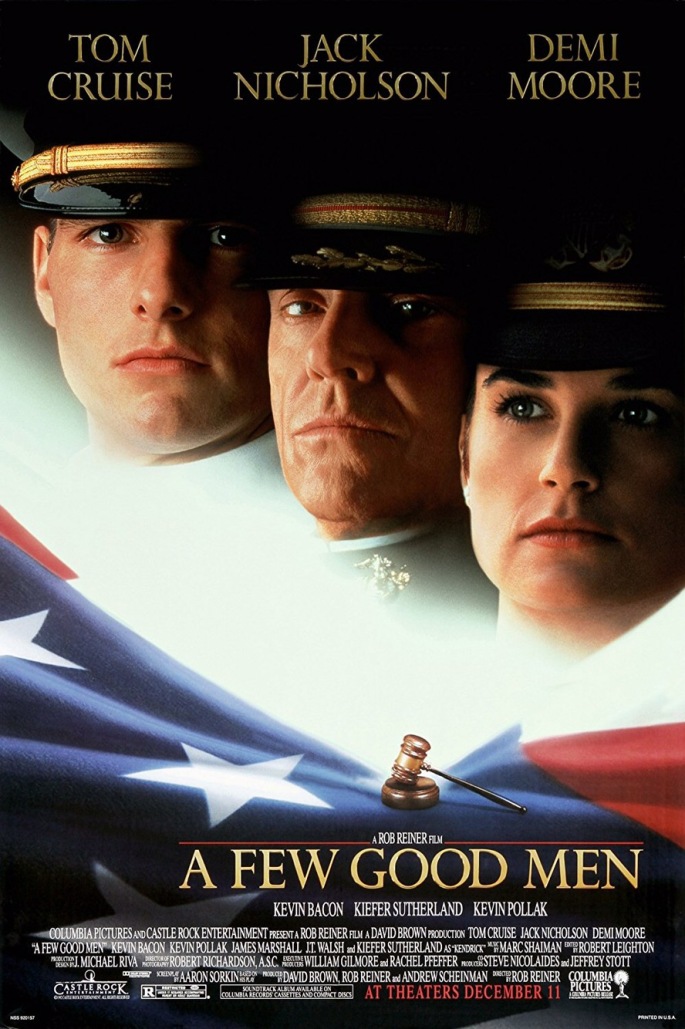 Hello everyone, welcome back to another movie review! Today I’ll be reviewing the film A Few Good Men. I saw this film for the very first time a few days ago and personally I loved the film. It’s a great movie! A Few Good Men is a 1992 film directed by Rob Reiner which stars Tom Cruise, Jack Nicholson, and Demi Moore.

The film is about two U.S Marines named Lance Corporal Dawson (Wolfgang Bodison) and Private Downey (James Marshall) accused of killing their fellow Marine named Private Santiago (Michael DeLorenzo) at the Guantanamo Bay Naval Base in Cuba. Due to their actions, they are charged for murder and have to go through court. However, the two fellow Marines said they were obeying orders so they had no other choice. Lieutenant Commander JoAnne Galloway (Demi Moore) wants to defend the two marines but the case is given to Lieutenant Daniel Kaffee (Tom Cruise) instead who is also a military lawyer. However Lieutenant Daniel Kaffee has no experience taking cases given in court and decided to do a plea bargain. However later throughout the film, he takes the case more seriously and has second thoughts for a plea bargain. Galloway is not taking the case but she does help Kaffee with the case. She eventually finds out that the two marines were given a “code red” order which is a very harsh punishment. We later find out during the film that Santiago wrote letters and the letters were about him not liking the base, not getting along with his fellow marines, can’t keep up,etc. Santiago wanted to get transferred to another base. Base Commander Colonel Jessup (Jack Nicholson) is the only person that could’ve ordered the “code red”.  So after a few truths being revealed,etc in the courtroom the final showdown was between Jessup and Kaffey. Kaffee yells at Jessup and demands answers from him. He eventually made him tick which made him admit that he did order the “code red”. Once he admits it, Kaffee says “The Witness has rights.” Captain Jack Ross (Kevin Bacon) then arrests Jessup on the spot. Downey and Dawson are not guilty of murder but they are discharged from the Marines. Downey doesn’t understand why but Dawson does. Dawson says they should’ve looked out for Santiago since that’s what marines do but unfortunately that wasn’t the case. The film ends with Dawson saluting to Kaffee after Dawson all this time believed Kaffee did not understand the marine code which was earlier in the film. 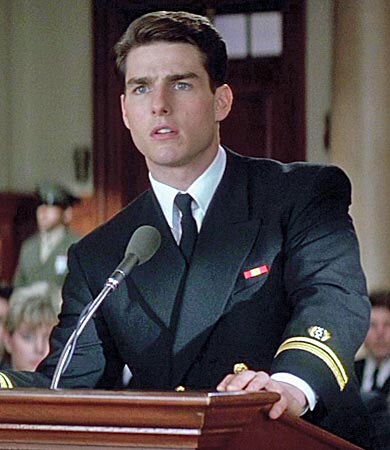 Now I gotta say that the performances in this film were amazing! I was very surprised with Tom Cruise’s performance especially. Tom Cruise is one of my favorite actors of all time. His character was a slacker at first but like I said earlier, he became very serious with the case and he was determined to know the truth behind the murder of Private Santiago. My favorite scene was when he brought Jessup to the stand and was yelling at him for answers. The emotion Tom Cruise showed in that scene was phenomenal. I really wish he was nominated and won an Oscar for his performance because he rightfully deserved it. But unfortunately, he was only nominated for a Golden Globe award. My other favorite scene was when Jessup was being arrested and he  says to Kaffee “Sweet dreams son.” Kaffee replies back with a great line. Here is the actual dialogue that he replied to Jessup.

“Don’t call me son. I’m a lawyer and an officer in the United States Navy. And you’re under arrest you son of a bitch.”﻿ -Leiutenant Daniel Kaffee

Jack Nicholson’s performance in this film was great as well. After seeing this film, this is one of my favorite performances by him. I’m a little disappointed that he didn’t win an Oscar but I am glad that he was at least nominated. My favorite scene by him was when Kaffee asks Jessup for Santiago’s transfer order paperwork. Jessup says to him that he needs to ask him nicely. This is the exact dailogue he said from the movie.

“You see Danny I can deal with the bullets and bombs and the blood. I don’t want money and I don’t want medals. What I do want is for you to stand there in that faggity white uniform and with your Harvard mouth, extend me some fucking courtesy. You gotta ask me nicely.”﻿ – Colonel Jessup

Demi Moore’s performance in this film was really good. To be honest, this is the very first film I’ve seen Demi Moore in. She is actually a pretty good actress. I wouldn’t say this is her best performance but she did a good job nonetheless. I liked that her character had doubts about Kaffee being able to take the case seriously but eventually her chemistry with him improves and she ends up helping him with the case. She gave him support when Kaffee  thought they wouldn’t win the case. 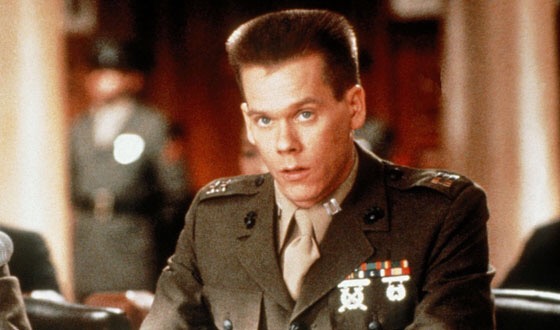 Keifer Sutherland was also in this movie and he played the character of Leiutenant Jonathan Kendrick. He played the character really well. I don’t know too much about Keifer Sutherland but I do know he is most known for his performance in the TV Series 24. He was also in the film Phonebooth and that movie was amazing as well. Kevin Bacon also did a good job with his performance. The cinematography, and screenplay of the film was top notch. It would’ve been nice to see the movie win at least one Oscar in the major or minor categories but at least it was nominated for four Oscars.

But anyways guys I hope you enjoyed reading my review of A Few Good Men. This is a masterpiece film and it’s definitely one of those movies where I can watch more than once. If you haven’t seen the film, I would highly reccomend it. I would rate this movie 5 out of 5. Stay tuned for another movie review. 🙂