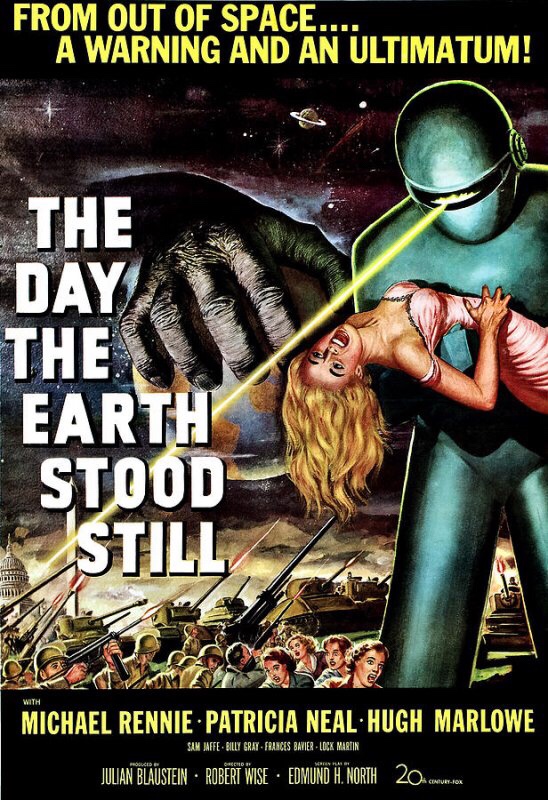 The Day The Earth Stood Still is a 1951 film directed by Robert Wise and it stars Michael Rennie, Patricia Neal, Hugh Marlowe, Sam Jade and Billy Gray. The film is about an alien spacecraft that arrives on Earth and the alien attempts to warn all the people of Earth the danger that is about to come and what they must do.

I’ve seen this film for the first time recently and I highly enjoyed it. I’ve seen the 2008 remake film first starring Keanu Reeves and Jennifer Connelly back at 2009 but I don’t remember too much of it. I did like it for what it was but after seeing this original film, I can now say that THIS film beats the remake by a long shot. I love black and white films and this film was no exception. I’ve only seen a few black and white films so far but I’ll continue to see more. I love science fiction films and this easily became one of my favorite ones.

There are a lot of great things about this film. The film starts off with a bang and goes straight to the point. Not exactly straight to the point but it leads up to the plot within 10 minutes of the film. It doesn’t start off with a sloppy start and you get into the film since the very beginning. The movie has no pacing issues and every scene leads up perfect to the next. The movie is very easy to understand and I really cannot see how you can dislike this film. The performances in this film were really good and I liked Michael Rennie’s performance the most. He plays the character of an alien named Klaatu and throughout the entire film you’ll understand his motives and realize his plans are not that threatening. The way he interacts with the other humans like the little kid named Bobby, his mom Helen and Professor Barnhart was phenomenal. He was interacting with them like an ordinary human and taking a fake identity name which was Mr. Carpenter while hiding his true identity. Even when he did revealed who he really was, he still acted like a regular person and not as a threat.

The main thing that blew me away with this film is the story’s plot. Klaatu comes to Earth with his robot named Gort to warn all inhabitants of Earth that they must not continue to have wars because it will be a threat to other planets. Gort would destroy Earth if Earth does not obey to live peacefully. This was mind blowing to me because in today’s world we are in one of the worst crisis in history (Due to our current so-called president Donald Trump, the NRA, etc). So if the events of this film actually took place in real life, I think we would be impacted the same way the inhabitants of earth was in the film. This movie really conveyed a great message and that is living in this world peacefully. We all wish to have world peace and this movie emphasized it really well which I highly loved. The main danger was the danger what Earth would potentially cause instead of what Klaatu and his robot were capable of. This isn’t the usual alien film where an alien invades and wreaks havoc. This film has an alien that invades but his robot will only destroy Earth if the humans doesn’t cooperate well. That’s how unique this film is.

The film’s budget was barely 1 million dollars and this proves that you don’t need a big budget film to make a great movie. Nowadays we have high budget films and not all of them are great. For a 1950’s film, it’s visually not that bad with the close 1 million dollar budget. Obviously if you compare to today’s movies, the visuals, CGI, practical effects, cinematography, etc are highly upgraded. But like I said, a big budget movie doesn’t always mean the movie is guaranteed to be great. Cinematography, CGI, practical and visual effects of course matters but the plot, characters, setting, music and theme matters more in my opinion. This film proves just that.

For a 1950’s film, this film can be a reference to humanity of what we need to do to stop all chaos and that is mind blowing.

There’s a character named Tom Stevens played by Hugh Marlowe and he’s very ignorant and obnoxious. Once he finds out who Mr. Carpenter really is, he wants to turn him in and receive fame. His character reminds me of some of the type of people in today’s world and how they can have a negative impact on society. This film portrayed this issue really well no doubt.

The character of Patrica Neal was outstanding as well. She plays the character named Helen Benson and the way her character develops is really good. She was one of the people also suspicious of Mr. Carpenter but once she knew his true identity and understood his true motives and the fate of the world, she became a different person. A different person that wanted to save humanity of Earth while helping out Klaatu (Mr. Carpenter). I’ve said this before in my other reviews but I’ll continue to say it. Character development is one of the beautiful things about films and even books. This film has one of the best character developments in cinema and Patricia Nealon did a solid job with the role.

There are actually no cons that I have for this film. I only have one nitpick and that is the ending. It was a bit underwhelming but it’s only a nitpick and it doesn’t hurt the film by any means.

The Day The Earth Stood Still is a phenomenal film and I would highly recommend this film to anyone who hasn’t seen it. I do think this film is underrated because I don’t hear no one talking about it so it would be great if this film got more recognition and attention. The film conveys a great message that we can all learn from. It’s a flawless film and it’s a true masterpiece no doubt. I’m giving this movie a perfect five star rating. Highly deserved! I’m looking forward to seeing more black and white classic films and reviewing them down the road. Hope you enjoyed my very first review of a black and white classic film and stay tuned for another movie review! 🙂