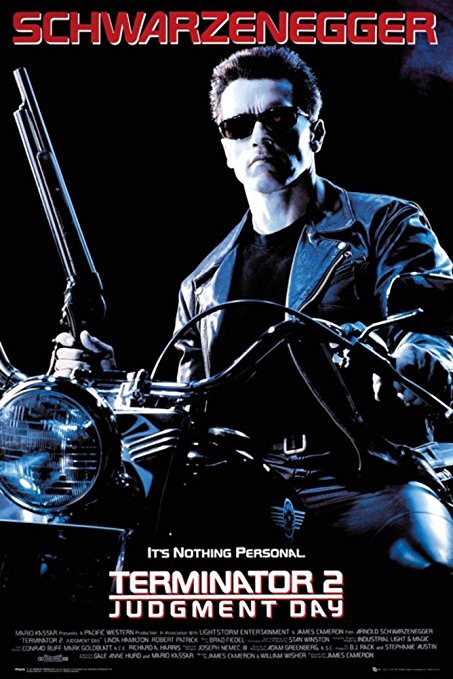 Terminator 2: Judgement Day is a 1991 sequel film of the first Terminator film and it is directed once again by James Cameron. It stars Arnold Schwarzenegger, Robert Patrick, Edward Furlong, Linda Hamilton, Joe Morton, and Earl Boen. The film is about two terminators going back through time in the year 1991 in which one is to kill John Connor and the other to protect John Connor at all costs from his killer. The T-800 is back in this movie and his objective now is to protect John Connor instead of being the villain like last time. The T-1000 is the villain this time and his objective is to kill John Connor in the past so he won’t exist in their present. He is a much more of an advanced Terminator than the T-800.

Words cannot describe how much I LOVE Terminator 2. I grew up watching this movie more than the first film and I know every scene and line by heart. It’s one of those movies that I love to death and this movie is the perfect example of why I love movies so much. Someone that I know gave me his VHS copy of the film to keep and I’ve seen the film countless of times. I still have the VHS copy surprisingly . I’m not sure if the copy is degraded though. This movie is the main reason why Arnold Schwarzenegger is one of my favorite actors of all time. It’s one of those movies that will never ever get old just like the first film. This movie literally changed the action and science fiction genre of films.

There are tons of great things about this film. There are so many iconic and memorable scenes and still to this day, people can recall them very well. The movie draws you in right when it starts off. The opening scene where the war against the machines is shown is pretty cool. Right away the action of that war begins and the viewer is already in for a treat. Sarah Connor (Linda Hamilton) narrates the story and she narrates the story in a really organized way that makes the viewer want to see more.

The scene where the T-800 (Arnold Schwarzenegger) arrives and asks and takes the biker’s clothes and motorcycle is one of the memorable scenes from the film. The scene where he takes a step out from the bar with his new clothes on and “Bad to the Bone” plays in the background is one of the iconic scenes from the film. The music fits perfectly with that specific scene and it was even more cool how he took the gun and shades from that bar owner who tried to stop him while that song was playing. The scene where both Terminators encounter John Connor (Edward Furlong) at the mall was one of the best moments from the film. The viewer seeing the film for the first time would know at that moment which Terminator is protecting him and which one is attempting to kill him. It was mind blowing when the T-800 says “Get Down!” to John because we were used to seeing him as the unstoppable killer cyborg in the first film. The chase sequence after the mall encounter was really cool and it was flawless.

The scene where John tells the T-800 that he cannot go around and kill people was another good scene because it develops the character of the T-800. The scene where Sarah Connor falls right in front of the T-800 in the mental hospital with a shocked expression was another amazing scene because the viewer can understand why Sarah felt that way after the events of the first film. The scene where the T-800 reaches out his hand and tells Sarah “Come With Me If You Want to Live” came in full circle. It was Kyle Reese who said that line from the T-800 in the first film and in this film it was the T-800 that said that. So it gives the viewer goosebumps. The scene with the second chase sequence that had Sarah being with John and the Terminator in the police car at the parking lot was a cool action scene. Seeing how the T-1000 (Robert Patrick) took bullets but still running after them was mind blowing. I’ll get to the T-1000 more in depth soon.

The scene where the T-800 asks John why do people cry was another scene that developed the T-800 as a character. The scene where the T-800 says he’ll take care of the police and says to trust him was another amazing scene. He took out the cop’s vehicles which made the cops to retreat instead of killing them. The scene where he tells Sarah and John “Stay here, I’ll be back.” became an instant iconic line just like the first film. This line is one of Arnold’s signature one liners and it will always will be. I was mind blown how he was taking the bullets from the cops in that scene and he was wounding them instead of killing them. The scene where the T-1000 hijacks the helicopter and simply says to the rider “Get Out” was a memorable scene. That scene followed the same recipe as the first film’s scene that included a similar situation. I loved the scene where the T-800 gets one of the guns and shoots the T-1000 right in the face as he is driving the truck and manages to make the truck topple over. It was so badass!

The scene where the T-800 says “Hasta La Vista Baby” to the frozen T-1000 before shooting him instantly became an iconic scene and another signature line for Arnold. The last act where the T-800 and the T-1000 fight one on one is one hell of an viewing experience. Seeing two unstoppable terminators going at it is definitely a pleasurable watch. The scene where the T-1000 shuts down the damaged T-800 temporary but comes back online using emergency power mode instantly became a memorable scene. I loved the music when he came back using emergency power mode as he is pulling the long stick out from his damaged body. The scene where the T-800 shoots the T-1000 and sends him down to the molten steel with his grenade launcher was the highlight of the film. It showed exactly how you can kill the T-1000 and it was creative just like it was creative in the first film. The scene where the T-800 bids farewell to an emotional John and Sarah as he is sent down to the molten steel with a thumbs up was such a powerful scene. It was a powerful scene because the T-800 says to John “I know now why you cry. But it’s something I could never do.” It was a scene of how deep the friendship was between John and the T-800. The last narration by Sarah Connor as she and her son are driving away was another highlight of the film because it sums up how great the entire film is.

There is a lot of character development with most of the characters. The T-800 has the best character development in my opinion. He at first is an aggressive character who is just doing what he needs to do but he later learns to at least try to act like a human being and becomes the hero of the film. The line said by Sarah at the end of the film, “The unknown future rolls toward us. I face it for the first time with a sense of hope. Because if a machine, a Terminator, can learn the value of human life, maybe we can too.” sums up how amazing of a character the T-800 developed.

Sarah Connor also developed great as a character due to what she said at the end. She’s at first cautious of teaming up with a Terminator in the middle act but as the film progresses, she realizes that terminators can change for the better too. John Connor also had good character development because he at first was a troublemaker but as the film progresses, he learns to be a more well mannered person and he teaches the T-800 the value of human life.

The T-1000 does not have any character development for the obvious reasons. His only objective is to kill John Connor as soon he was introduced. The T-1000 itself as a character is one of the reasons why this movie is amazing. The CGI effects on him when he takes bullet shots is mind blowing to see for a 1991 movie. It feels like the CGI was way ahead of its time. What’s amazing is that today’s CGI cannot even be compared to this film’s CGI because this film is superior in that category. Nowadays CGI is used for unnecessary reasons. But when you have a film like this, it’s necessary to include the “right CGI”. The liquid metal body formation the T-1000 has looks so badass and intimidating! I also loved it when he realizes he’s becoming frozen after that truck spilled that liquid nitrogen. It was so damn unique and it makes me love the fact of how much creativity you can have when you make a film. When he gets shot in his frozen form and reforms in his liquid form, it was really a mind blowing scene.

The score for this film was once again done by Brad Fiedel and he did a great job. There were parts in this movie where the music was perfect for a certain scene as I’ve mentioned some earlier in this review. There are tons of action scenes in this movie and they were executed flawlessly. As I said earlier, the fights between the T-800 and the T-1000 were really cool and it makes you wander how in the hell can one win in this fight? The pacing was well balanced in this movie and there is not a single dull moment in the film.

This movie made Arnold Schwarzenegger a mega star and this movie was definitely ahead of its time for a 1991 film. This is one of James Cameron’s best directed movies and it’s my favorite James Cameron movie.

I have no issues or nitpicks with this film!

Overall, Terminator 2: Judgement Day is a science fiction action movie that is truly phenomenal and I consider it an “immortal” classic. It’s a movie that acts as a role model for current action movies that we see today. It’s definitely a masterpiece and I’m gonna rate it five out of five stars. If you haven’t seen this film, then I highly recommend it. You’ll LOVE it!

I hope you guys enjoyed reading my review of Terminator 2: Judgement Day and stay tuned for another film related blogpost or movie review! 🙂