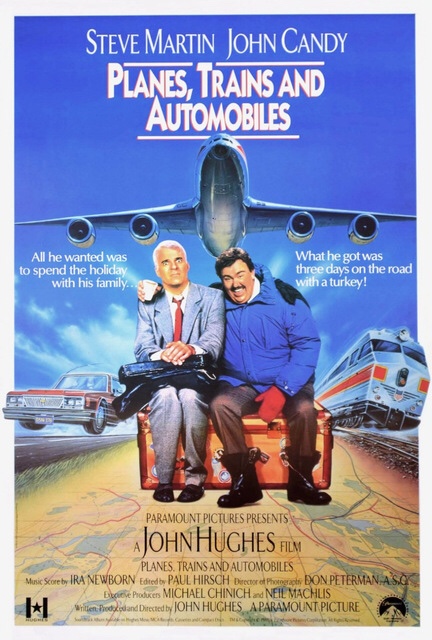 Planes, Trains & Automobiles is a 1987 film directed by John Hughes and it stars Steve Martin, John Candy, Laila Robins, Michael McKean, Kevin Bacon and Dylan Baker. The film is about a marketing executive named Neal Page who is struggling to get home for Thanksgiving and has a companion along the way named Del Griffith who is a shower curtain salesman that turns out to be annoying to Neal. The film made $49.5 million at the box office during that time.

I said earlier that everyone needs to see this movie once a year on Thanksgiving because not only as a thanksgiving tradition, but also how amazing this movie is. This movie is really hilarious from start to finish. You are immediately drawn to the story right from the beginning. The movie is paced in a well balanced way and there are barely any dull moments. There are tons of memorable scenes that make the movie an enjoyable to watch which I’ll get to soon. The other main great thing about this movie is that it teaches a valuable lesson while it’s a comedy movie. The movie shows it can be hilarious and show it has a lot of heart. I love movies like that because it’s very unique and it works flawlessly.

The beginning scene where Neal (Steve Martin)is racing Kevin Bacon’s character to catch a cab and running after his actual cab after Del Griffith (John Candy) stole it was hilarious. This occurred in the beginning and this proves my point that the movie is hilarious from beginning to end. The scenes where Neal and Del have to spend the night in Wichita at a motel together was a memorable one. When Neal confesses to Del that he is annoying, etc, Del tells him that he likes himself, his wife and customers like him. I really liked that part because it teaches the viewer to like himself or herself the way he or she is and don’t care what other people think. The scene where both are sleeping on the same bed and find out both are holding each other in their sleep during the morning was hilarious! It’s a cliche scene but it’s funny nonetheless. So you really can’t complain.

The scene where Neal tells Del that he stole his money and Del tells him he did not is my favorite scene in the movie. The scene’s dialogue went like this:

Neal: You know goddamn well what.

Del: I didn’t touch your dough Neal. I’m a lot of thugs but I’m not a thief.

Neal: You went into my stuff last night didn’t you?

Del: I didn’t take your money. And I don’t care for the accusation.

Neal: Well I had over 700 dollars in here. You went into my wallet for pizza. Just maaaybe you went into it you had to-

Del (takes out his wallet): Count it!

Neal: Oh like you keep it in there if you stole it!

Del: There’s 263 dollars in there. There’s a dollar more then you can call me a thief!

*Neal takes his wallet and checks*

Neal: This doesn’t prove anything.

Del: What!?! *checks his wallet* We were robbed!

Neal (sarcastically): Do you think so?

Del’s expression as he was shocked that he had no money in his wallet had me dying of laughter when I first saw this scene. I still laugh a lot when that scene comes up. I give props to John Hughes for making that scene smartly funny. It’s this scene alone that makes me want to watch this movie countless of times.

Another memorable scene was when Neal angrily tells the rental car employee he wants a car as he’s dropping the f bomb in mostly every sentence he told her. The rental car employee concludes the conversation by saying “You’re f**”. It was such a hilarious and iconic scene! I think this scene was the only reason why the movie was rated R. The entire movie excluding this scene seems like a PG rated movie. But it’s no big deal.

My third favorite (my second favorite I’ll mention in a bit) scene is when Del is driving his own rental car as Neal is on the passenger seat. That’s my third favorite scene because Del was driving the wrong way in the free way. Another driver from another car tells them they are going the wrong way and Del asks Neal, “How would he know where we’re going?” I couldn’t stop laughing when I saw that scene for the first time. It still makes me laugh no doubt. Also when Del is imagined as the devil while laughing is also another iconic scene.

My second favorite scene from the film is the film’s ending. When Neal realizes Del may be alone for the holiday, he goes back to the train station and sees Del all alone. Del tells him he has no home and his wife died eight years earlier. Neal decides to invite Del to his home for thanksgiving and he introduces him to his wife, and his family when he arrives at the end. This is the reason why this scene is one of my favorite scenes from the film because it proves that this movie can be hilarious but also have a lot of heart. This scene also shows how Neal developed as a character. It’s amazing because he went from a mean individual that couldn’t take Del’s presence to a compassionate guy that invites Del for Thanksgiving since he has nowhere to go. The scene nearly brings tears to my eyes. I also liked how Del was looking at Neal at how he was hugging his wife, etc at the end scene because I think it showed how Del missed having that companionship with his wife. Del’s expression showed that and it was a powerful scene.

This is definitely my favorite John Candy and Steve Martin film. I hope John Candy and John Hughes are resting in peace. Candy’s performance was immortal in this film. I haven’t seen too many John Candy movies but I did love him in Home Alone. I also haven’t seen too many Steve Martin movies but he is a great actor no doubt. Both actors are great with comedy films and both were perfect for their roles in this film. John Hughes did a great job directing this film and I’m happy he directed it. I still have yet to see The Breakfast Club for the first time.

How amazing would it be if this movie was based on a true story. It would be mind blowing for sure if that was the case. If Del Griffith was a real person in real life, I’d definitely be his friend.

Planes, Trains, & Automobiles is no doubt a masterpiece and I’m going to rate the movie five out of five stars. This film will never get old and it’s right up there with Home Alone as one of the best comedies ever made. If you haven’t seen the movie, then I highly recommend you to see it and always see it once a year during Thanksgiving or near Thanksgiving. I hope everyone has a wonderful Thanksgiving and stay tuned for another film related or movie review post! 🙂