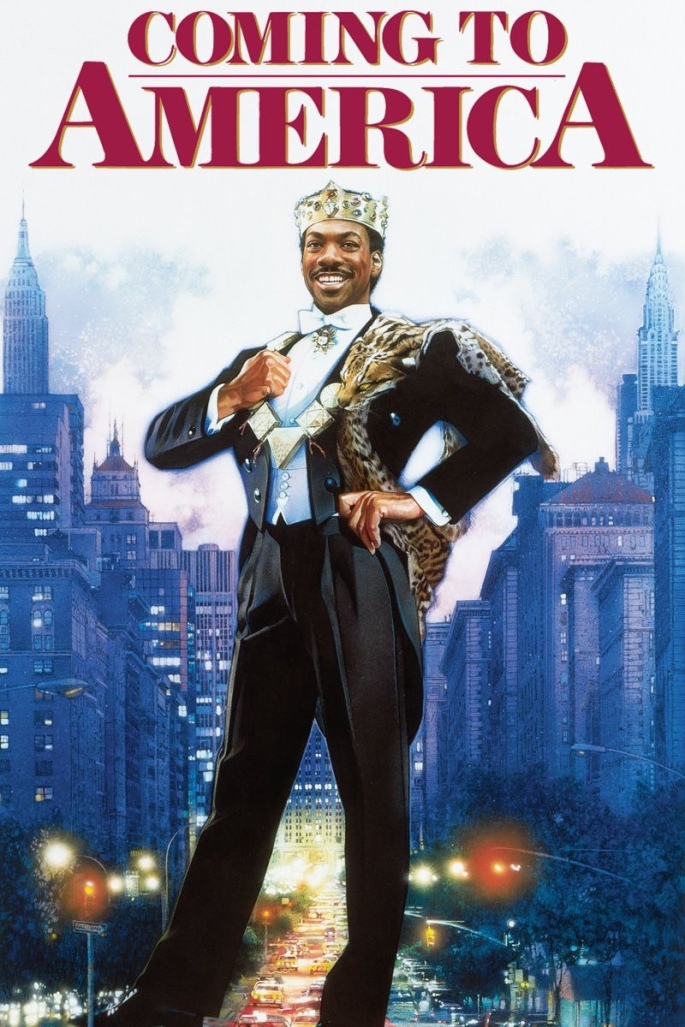 Coming to America is one of those films I’ve seen small bits of as a kid but not as a whole. I recently got the bluray and I finally got the chance to see the film fully for the first time. Eddie Murphy is one of my favorite actors and I’ll see majority of his films that has him as the including cast. But the story has to be decent or really good. I’ve haven’t heard too much reviews of this film as I grew up but I believe it was mixed.

The main good thing about this movie is the movie’s plot. Prince Akeem wants to visit America and look for a bride to bring back to his home named Zamunda and marry her. His target location is Queens, New York and he brings his best friend Semmi along with him. As they both settle in their rented apartment, Prince Akeem begins to slowly fit in with this new lifestyle. He eventually does find his love interest named Lisa but she has a boyfriend named Darryl. In the middle act of the film, you see Akeem trying to impress Lisa and win her over. He eventually does win her over and they get married at the end of the movie. The plot itself is cliche since the male falls in love with the female but the female has a boyfriend/husband. The male will try to win her over and eventually both  will like each other and the boyfriend would be cast aside. However for a movie that came out in 1988, it might’ve not been cliche at the time.

The other great thing about this movie is the fictional place named Zamunda. In the first act, you see how Prince Akeem lives his lifestyle in this rich lavish place and how he interacts with his family and the citizens. At the time of 1988, the setting and the characters that were part of the setting was probably really mesmerizing to view.

There was great character development in this movie with Prince Akeem, his father, and Lisa. Prince Akeem at first never wanted to get arranged marriaged to someone he never loved and from that point on, he set out a quest to find someone he loves from the heart.

Lisa also developed as a character because at first she did not like the fact that Akeem never told her she was a prince and he was rich, etc. But at the ending of the movie, she has second thoughts about him and surprisingly appears as the bride for Akeem.

The movie has a good message about marrying and loving someone from the heart and never marry anyone that you don’t love but you are forced to. In today’s world so many countries have that cultural mindset involving arrange marriage which is sad. So I suppose this movie does a good job talking about this problem indirectly.

While this movie has a lot of good things, there are some things that could’ve been fixed. In the middle act of the film, Akeem tries to get to know Lisa and win her over. It’s a decent concept but in my opinion it was a dull middle act. Nothing really exciting happens. There was also no plot twist in this movie because the viewer knows what it is from the beginning. Akeem never tells Lisa he is a prince and he’s rich, etc but the viewer obviously knows that. So when Lisa finds out, it was never a shocking reveal.

As I’ve stated earlier that the comedy delivers in some parts, it doesn’t delivers in other parts. I chuckled a little bit every now and then but it’s not a movie that will make you laugh constantly. Maybe it might be for other people but for me some scenes was just laughable for a few seconds.

I also thought the movie didn’t need to have a rated R rating. The movie shows content that it is rated R but honestly those content could’ve been replaced with something that could’ve worked way better in PG-13. That’s just my opinion.

Overall, Coming To America is a decent movie and it’s definitely one of Eddie Murphy’s notable films. Is it a movie that is watchable more than once? I’d say yes but I wouldn’t watch it on a frequent basis. Probably once in a while. However I’m glad I own this on my collection because eventually I’ll see this movie again and I need more notable Eddie Murphy films in my collection. The movie is a classic in terms of the comedy and plot wise so I’m gonna rate the movie three out of five stars.

This same exact review can be found on my Letterboxd account. Here are my links.