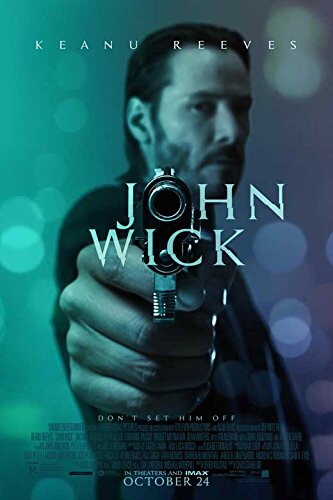 John Wick is one of those films that I’ve never seen since it came out back at 2014 but I’ve heard so much good things about. It’s been on my watch list for a very long time and I’ve finally gotten the chance to see it lately. I wasn’t able to see the movie a while back because there were other films that I needed to see for the first time and also busy with college, life, etc. But I’m so glad I was able to watch it and I definitely regret not seeing this movie when it first came out in 2014. Lets get down to business.

The great thing about this film is the simplicity of the story. The story is so simple that it actually manages to prevent plot holes, etc. A former assassin named John Wick has a wife that recently dies and the only thing he has left given to him by her is a loyal adorable dog to keep him company and enjoy life. But a group of gangsters break into his house, kills his dog, and steals his fancy car. John comes out of retirement to get revenge by tracking down and to kill them all. That’s the plot in a nutshell and it doesn’t get any simple than that.

I love movies that have simple plots because it usually allows the movie to have barely any pacing issues or any dull moments. Each moment gets straight to the point and it doesn’t make the viewer be bored. That being said, the movie did that by the phenomenal action scenes it delivered. As I was watching the movie, I was just so mind blown with the action scenes and it’s definitely one of the best action scenes I’ve ever seen in cinema history. The action scenes are the main thing that takes the spotlight of the film and everyone remembers this movie mostly due to the action scenes.

I loved the characters in the movie especially John Wick because he was simply just badass and so intimidating. Keanu Reeves was perfect for this role and it’s definitely his best role since The Matrix. As I was seeing him kick ass, I was thinking in my head if I ever meet Keanu Reeves in real life, will I be intimidated? I know he’s only playing a character but his performance no doubt was a memorable one. It was also cool to see Willem Defoe in this film and surprisingly I haven’t seen too many of his films besides the Sam Raimi’s Spider-Man trilogy. The villains Viggo and his son Losef were so good that it actually made me feel very angry towards them (in an entertaining way). As John was taking their henchmen down and eventually them, it made me get pumped and excited!

Also huge credit to Chad Stahelski for directing this film. He did a great job making this movie truly original and really intriguing.

Overall, John Wick is a film that surprised many movie lovers and it instantly became one of the best films of the decade. Speed was my favorite Keanu Reeves movie but now it’s definitely John Wick. Speed is currently my second favorite Keanu Reeves film. This movie is no doubt great and I’m going to rate this movie five out of five stars.