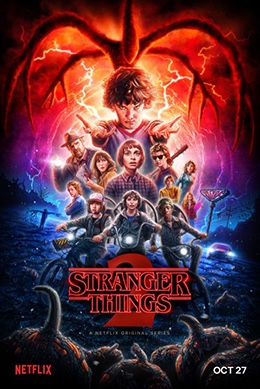 After seeing season 1 of Stranger Things, I knew I had to see season 2 right away. Season 1 of the show blew everyone away and people wanted more of the show. Season 1 was one of the main reasons Netflix has been doing well in terms of popularity and financially. It was a show that everyone was talking about. As I’m writing this review, season 3 has already been released and I just finished seeing season 2. Currently, it is safe to say that season 2 is my favorite of the series (so far).

The main great thing about season 2 is the character development in my opinion. In season 1 we were introduced to the characters that we instantly became invested with. However in season 2, you become even more invested with them as they learn so much about themselves as each episode progresses. For instance, Steve in season 1 was mostly a jerk but throughout the ENTIRE run of season 2; he was a totally different person. Him and Nancy break up in this season and right after that you see him taking care of Mike and his friends and protecting them against the Demogorgons. It shows that Steve learned to love and take care of himself more and he doesnt really need Nancy. Obviously he’s upset about the breakup, but he learned to move on he was very mature in this season and I’m glad what the Duffer Brothers have done so far with him. In my previous review, I’ve mentioned Nancy and Jonathan showed hints of them liking one another and this season confirmed they had feelings for another. I’ve always knew right from the beginning of season 1 that Nancy and Jonathan might actually create a spark so I guess I was right. Eleven developed well as a character too because you see her finding her lost sister and allying with her to get revenge on those that hurt them and their mama. But Eleven realizes she’s not like Kali and her gang and she needs to go back and help Mike and his friends back home. We are introduced to four characters in this season and they are Max, Billy, Dr. Owens, and Bob. I was actually happy to see Dacre Montgomery being casted in Stranger Things because I liked him as the Red Ranger in the 2017 Power Rangers film. But in Stranger Things, he’s the opposite what the red ranger should be so it’s ironic and hilarious. He played his character so well and you actually feel like you hate him even though it’s only a TV series. Max is Billy’s stepsister and she joins Mike and his gang, even though Mike has doubts with her in the beginning. Bob is Joyce’s new boyfriend and I actually didn’t like him at first because I just thought he was a useless character. But what he does at almost end of the season before he dies by one of the monsters made me change my mind. He at first was a clueless guy that didn’t know what was going on but once he was involved in the situation, he was actually really helpful. Another great character development right there. Every character in this had their chance to shine and that’s what every tv series should follow.

It’s no question season 2’s story is just as good or probably even better than season 1’s story. Will is definitely the main protagonist in the show once again but his role is different than his role back in season 1. After the cliffhanger ending of season 1, you see Will has the power to see the Upside Down and sees a horrific shadow monster coming after him in his real visions. Eventually the shadow monster manipulates him and it’s up to everyone to free Will from the monster and Eleven to close the gate of the upside down. Just like season 1, almost every episode had a cliffhanger ending and it made you want to see more. There were so many twists and turns and my favorite twist would probably be Dustin befriending a baby Demogorgon monster even though he didn’t realize it was one at first. When he did realize it, it took me off guard since you see the baby Demogorgon eating Dustin’s cat. My first favorite scene would definitely be when all the characters that are involved with the plot reunite together at the lab at episode 8. It was a cool moment because team ups/crossovers are always a great thing whenever you’re watching a TV Series. My second favorite scene would definitely be Eleven joining the entire gang at the end of episode 8, since you never really see her be with the gang as much as she was in season 1. So it was definitely worth the wait when you see the other characters (especially Mike) have an expression of relief and joy. It was cool to see Eleven at the cliffhanger ending of the first episode since we all thought she died at the end of season 1. Another cool scene that I liked was when Dr. Owens gives Hopper a birth certificate which meant Hopper is the new father of Eleven. My last favorite scene was when Will and his gang, Nancy, and Eleven were all at the school’s winter dance snowball. They all were having a good time and I loved the song that was playing at the background which was Every Breath You Take sung by The Police. That song is one of my favorite songs of all time and it was definitely the perfect choice for that happy moment. Of course you see that the Shadow monster is still alive and it’s outside the school so it was a season finale cliffhanger. The Duffer Brothers does not disappoint the viewer when it comes to wanting for more.

This season also had comedic moments and the comedy was not forced and it actually fitted perfectly with some certain scenes! There were no pacing issues and barely any dull moments! Every episode was like an hour long but it didn’t feel like an hour since you are really drawn to the story.

I have no flaws with this season but my only nitpick is episode 7. Episode 7 was a good and needed episode but the problem was it did not transitioned to the other characters or even the plot at all since it focused heavily on Eleven finding her lost sister and joining her. Again, it was also a necessary episode to show since it allowed Eleven to develop more as a character but also at the same time, the episode really ignored the main conflict of the story. It would’ve been better if it showed both stories because there were some scenes that I would’ve taken out from that episode. While taking those scenes out, I would’ve showed the transition to the other characters and show what they were up to. But nonetheless, it’s only a nitpick and not a flaw to me because that episode was the highlight of Eleven’s development as a character.

Overall, season 2 of Stranger Things does not disappoint and it continues to go to the right direction in terms of the plot. As I’m writing this review, I’ll be watching season 3 later on today so season 3 might be my favorite of show. We shall see. But despite the nitpick I had with season 2, the season is a stellar and I’m going to rate the season five out five stars.