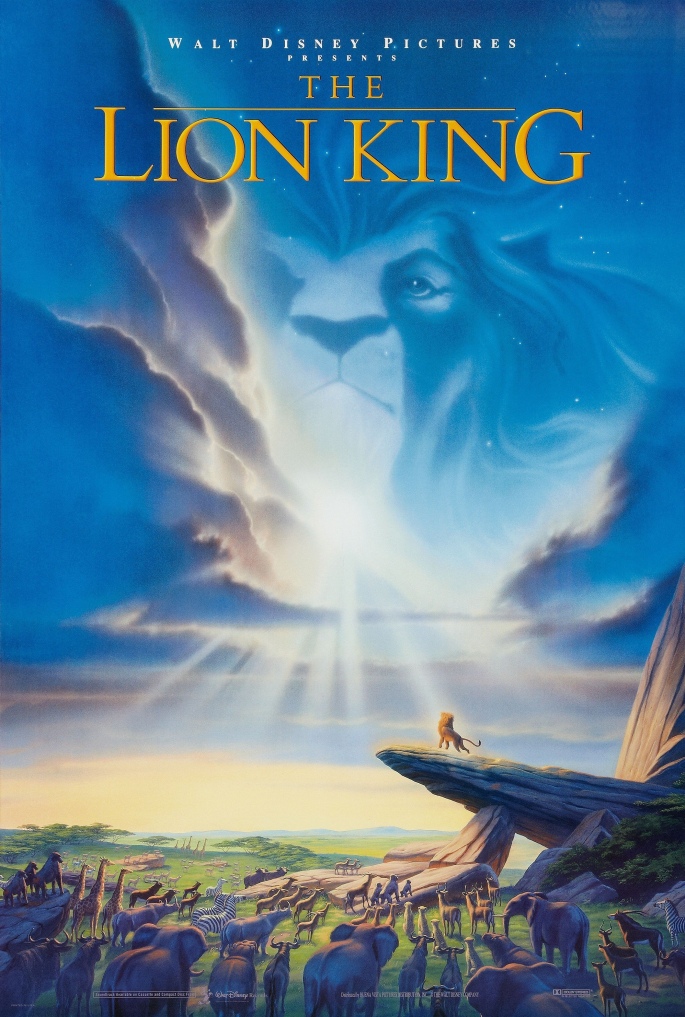 As I’m writing this review, I will be seeing the live action Lion King film later today. So I wanted to share my thoughts on the animated film. I just finished watching the animated film for the millionth time but it was my first time seeing it in 4K. The 4K looks amazing and the Dolby Atmos audio is AMAZING! The 1994 Lion King film is one of my favorite films of all time. It is a film that I grew up watching and I know the film by heart. It’s definitely in my top five favorite Disney films. Every time I watch the movie, the movie always feels magical to me.

The main great thing about The Lion King is the story. We all know what The Lion King is about but for the sake of the review I will of course recap it in a nutshell. In Africa, lions rule over a kingdom filled with animals from a location called Pride Rock. Mufasa is the current king of the kingdom and he and his queen Sarabi recently have a son named Simba who is scheduled to be the next King. However Mufasa’s little brother named Scar has his own agenda and that is becoming king instead and plans on killing both Mufasa and Simba to take the throne. That’s the main plot in a nutshell. At the time of 1994, this movie was ahead of its time in terms of story wise. The story is so unique and original and still to this day the 1994 film is shown to today’s generation and will be shown future generations for sure. This movie is so beloved that it even has its own broadway play! Y’all probably know that by know but it’s still worth mentioning.

You are introduced to so many characters in this film and it’s amazing how each character is memorable! Even the side characters! You have to give a lot of credit to the voice actors because no doubt they made the characters shine and memorable. James Earl Jones as Mufasa is no doubt one of the best casting choice for a character in cinematic history. He was already well known before this movie (voice of Darth Vader) but after this movie came out, his acting career went to an even higher level! Jeremy Irons as the voice cast of Scar was also a great choice! When you are first introduced to him in the film, you can tell by his voice that he is the antagonist. Jonathan Taylor Thomas as young Simba and Matthew Broderick as older Simba were good casting choices as well. This movie also made Jonathan Taylor Thomas a star back in the day but nowadays it just sucks that he’s barely in a movie or even on a TV show. I always liked him as an actor. I thought the guy had a lot of potential. But maybe more on that topic for a different blog post. Everyone knows who Rowan Atkinson is and him as the voice of Zazu is also another plus. He was already a star just like James Earl Jones before this film but this movie also made his career at its peak. Atkinson is known for his iconic role of the TV Series Mr. Bean. Whoopi Goldberg (another well known actress) and everyone else was also a good choice for their roles!

There are tons of scenes in this film that I loved. The opening scene of the film that plays The Circle of Life theme is one of the famous opening scenes ever and the theme is an iconic masterpiece. Simba being born and held by Rafiki for the ceremony is also another iconic scene. The mini speech Mufasa gives to Simba about how everything the light touches is their kingdom still gives me goosebumps. It went down like this:

Mufasa: Look, Simba, everything the light touches is our kingdom.

Mufasa: A king’s time as ruler rises and falls like the sun. One day, Simba, the sun will set on my time here, and will rise with you as the new king.

Simba: And this’ll all be mine?

Simba: Everything the light touches… What about that shadowy place?

Mufasa: That’s beyond our borders. You must never go there, Simba.

Simba: But I thought a king could do whatever he wants?

Mufasa: Well, there’s more to being king than getting your way all the time.

(Mufasa and Simba walk through plains)

Mufasa: Everything you see exists together in a delicate balance. As king, you need to understand that balance and respect all the creatures, from the crawling ant to the leaping antelope.

The song I Just Can’t Wait to be King is my favorite song from the entire film. I’ve had so many fond memories of this song back in elementary school. I loved how Simba and Nala were messing with Zazu right before that song started playing. Still to this day I get goosebumps listening to it. I loved the scene where the Hyenas are stopped by Mufasa and both asks Ed if he knew Simba was Mufasa’s son. He responded by happily nodding. I laughed at that scene as a kid and I still laugh at that scene as an adult.

Scar’s Be Prepared song as he plots to kill Mufasa and Simba is also another iconic song since it symbolizes the type of character he is. The stampede occurring while Simba is there is when the movie is at its climax. So much is happening in that scene and you wander what will happen to Simba. When Mufasa gets involved, you are drawn to the movie even more since you know Scar planned this all along which involves the death of Mufasa and Simba. When Mufasa saves Simba but pleads for help from Scar is when the movie starts to get tragic. Scar simply gets hold of his paws, says “Long live the King”, and let’s him go which leads to his death from top of the cliff. In my opinion, it’s one of the saddest death scenes in cinematic history. Also it’s from a Disney film too! Usually Disney films do not have a dark tone but this scene alone was dark that it made kid viewers at the time loss for words and/or be emotional. Even adults have the same reaction still to this day!

When Simba meets Timon and Pumbaa and eventually grows up with them to be a full young adult lion was really cool to see. The song Hakuna Matatta is another iconic song and you can actually learn from Timon and Pumbaa to not worry too much. The chemistry between Simba and Timon/Pumbaa was really good and you can tell they are really good pals. The transition as they all sing Hakuna Matatta as Simba being a cub to a full grown Lion was another highlight of the film. Timon and Pumbaa made the comedy in this film come to life and it allowed the film to have a dark tone and also a light tone which was really unique. My favorite comedy scene by them is definitely this:

Nala: Have you guys seen Simba?
Timon: I thought he was with you.
Nala: He was, but now I can’t find him. Where is he?
(Rafiki appears, laughing in a tree)
Rafiki: Hoo-hoo-hoo! You won’t find him here! Ha ha! The King has returned.
Nala: I don’t believe it. He’s gone back!
Timon: What?
(He looks up to see that Rafiki has disappeared)
Timon: Hey, what’s going on here? Who’s the monkey?!
Nala: Simba’s gone back to challenge Scar!
Timon: Who?
Nala: Scar.
Pumbaa: Who’s got a scar?
Nala: No, no, no. It’s his uncle.
Timon: The monkey’s his uncle?!
Nala: No! Simba’s gone back to challenge his uncle to take his place as king.
Timon and Pumbaa: Ohhh.

It’s still such an hilarious scene to this day. My two favorite scenes of all is when Simba sees the ghost of his father in the night sky and Mufasa tells him to remember who he is. The scene went down like this:

Mufasa: Simba, you have forgotten me.

Mufasa: You have forgotten who you are, and so forgotten me. Look inside yourself, Simba? You are more than what you have become.

My second favorite scene is when Rafiki tells Simba this:

Rafiki: Oh yes, the past can hurt. But the way I see it, you can either run from it, or learn from it.

Both of these are my two favorite scenes from the film because it automatically changed the direction where the film was going and it was a huge turning point. Both scenes are really motivational and you can definitely learn from it.

When Scar confesses to Simba and the others that he killed Mufasa was another highlight of the film. We all knew it was him since we are watching the movie but seeing the characters being shocked about it made it feel we just found out like them for the first time about the news. The scene where Simba and Scar are exchanging blows after Scar refuses to run away and to never come back to Pride Rock was another cool scene. It made you cheer for Simba as he was taking on Scar at the end because all these years Scar lied to him about everything. Simba couldn’t have said it simple enough to him:

Simba: Why should I believe you? Everything you ever told me was a lie.

The ending scene where Simba is declared officially the King of Pride Rock as he roars right after the ghost of Mufasa once again tells him to “Remember” definitely gives you the chills. Right before the movie ends, you see Simba and Nala are married and they have a baby daughter.

When it comes to character development of the film, the best character development no doubt goes to Simba. Throughout the first half of the film, you see him as a baby lion who wants to be king and rule the kingdom (in a brave heroic way) but you also see him be a little arrogant about it. However, during the second half of the film you see him lost and confused with himself since he is the one to blame for his dad’s death. Even his best friend Nala couldn’t make some sense into him to come back to Pride Rock. However once Rafiki shows him that the spirit of his dad lives on within him and he sees his ghost in the night sky developed his character. As I mentioned above, the ghost of Mufasa tells him to remember who he is and Rafiki tells him that you either have the option to run from your past or learn from it if it hurts. That lit a spark within Simba and it enabled him to learn more about himself. Not only he became who he was destined to become but he also became someone only Timon and Pumbaa know very well since they technically raised him after his father’s death. So in way his personality is a combination of his father and the personality of Timon and Pumbaa which made him running away kind of worth it. It allowed Simba to find himself and also add some changes to his character along the way.

This movie is about 1 hour and 28 minutes long and there were no dull moments and the pacing was well done. At times you feel emotional while watching certain scenes that occurred during the film. The animation of this film is so beautiful and certain animated shots of the film really stands out. My favorite shot would be when Mufasa and Simba are looking over Pride Rock as he is explaining the kingdom. Which is why the image of this review is that shot.