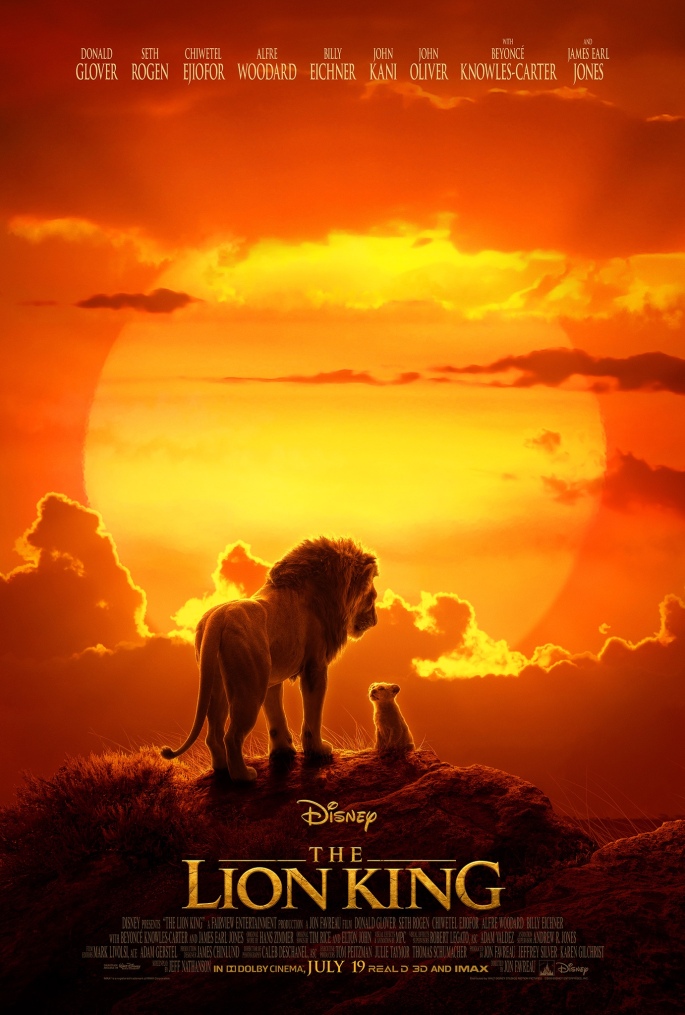 Well I finally got the chance to see the 2019 live action Lion King film. Before I’ve decided to watch it, I wanted to watch the animated classic and see how it looks like in 4K quality and how it sounds like with the Dolby Atmos audiotrack.  I saw the live action film on premiere night and I saw it in Dolby Vision format at AMC theaters. This movie was one of my most anticipated films of 2019 since the animated classic is one of my favorite films of all time. Now let’s see what are my thoughts are for the 2019 film.

The main great thing about this film is how gorgeous it looks! As I watching the film in Dolby Cinema, I was just blown away of how the visuals look very stunning and very lifelike! Even though the entire movie was CGI, it just blew me away of how everything looked so real. Seeing Simba, Mufasa, and all the other beloved characters we all know and love in a CGI real life version form was really mind blowing to see. It was great to hear the Circle of Life theme, Can’t Wait to be King, and the other iconic themes we all know and love in this movie all over again. As it should with every other live action Disney remake, the film did a good job to stay with the main story line of the film. It was cool to see how majority of the film was very similar to the animated classic in live action CGI form.

Even though there were things that I loved about the 2019 Lion King film, there were too many things I didn’t like about this film unfortunately. The first thing that I didn’t like was how there was no emotions with the animals as they were interacting with one another. It really got me upset and I noticed it within the first ten minutes of the film. I also thought the dialogue felt way too rushed within all the animal characters. Even though majority of the dialogue is exactly like the animated classic, it just felt to me that this version was rushing the dialogue to get to the next part. In the animated classic, the dialogue felt smooth and it actually made you feel like they are having a regular conversation. This version felt like the dialogue really came off the script and the cast and crew just wanted to get it over with. At least in my opinion. I noticed this when Scar and Zazu were first talking in the very beginning of the film.

Speaking of Scar, he was not as menacing as the animated Scar in my opinion. In the animated version, Scar was really sneaky, menacing, sly, and a mastermind. In this version, he was not any of these things. He was more of a mediocre villain that just wanted to get things his way. The CGI live look on Scar did not look that good either in my opinion. The scene where he kills Mufasa and says “Long live the King!” got me really disappointed. It did not make me feel heartbroken or sad once again just like the animated classic did (in an entertaining way obviously). The way Scar said it in this film felt like he was declaring it to everyone instead of saying it with a sneaky whisper since it was said like that in the animated classic. Favreau should’ve brought back Jeremy Irons for the role. James Earl Jones did good as Mufasa but I liked his voice acting better in the animated classic.

I also did not like how they did not improvise and add more new sub scenes that ties to the main plot of the film. In the 2019 Aladdin film, Guy Ritchie did just that and it worked flawlessly. The live action Lion King barely had any of that and just made 95% of the film like the animated version. Of course I’m happy they stayed true to the original classic, but it would’ve been cool to add some new elements that can tie to the storyline. They added one new scene where Nala and everyone at Pride Rock are suffering under Scar’s reign and Nala decides to get help. That was pretty cool to see since that was not included in the animated version. But I just wanted more of that similar element a little bit more.

The other thing I did not like was that the scene where Rafiki tells Simba about the past being hurtful never popped up. I was hoping to see Rafiki explaining that to him because that short lecture in the animated version is so iconic and you can definitely learn from it. I was just mad when I saw that was not included. The movie is majority like the animated version but the ONE thing they decide to take out was this scene. Very big mistake because that scene in the animated classic made me love the Lion King so much and it developed Simba’s character to a whole new level.

I also did not like how the ghost of Mufasa was talking to Simba a little more than he originally did in the animated classic. In the animated classic, he simply tells him to remember who he is and how he has forgotten him. But in this version, those were all included but some minor dialogue was incorporated and that takes away the magic of thinking if Mufasa was a ghost or not. In the animated classic, I didn’t realize he was a ghost because he did not say too much which got me confused (in a good way). This version felt like it was forcing us to understand Mufasa is a ghost and it didn’t allow us to make our own judgement.

Overall, the live action Lion King has stunning visuals but it doesn’t live up or come a little bit close to the animated classic. This was one of my anticipated films of 2019 and it’s disappointing that it was a major letdown. I will still buy the 4K bluray of the film because I still think it’s watchable for the gorgeous visuals. I’m going to rate the live action Lion King film two out of five stars sadly.